I do not wish to brag, but I can eat a mean cupcake.

I’m not so shabby at making them, either. 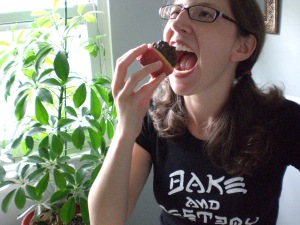 Holy CRAP, I was young there!

As I’ve lamented before, most Asian kitchens don’t have ovens, which is a very sad thing for somebody who likes to bake as much as I do.

Luckily, I am staying with my incredibly generous and amazing friends, Eric and Melanie, who have the nicest apartment I’ve ever lived in, period, and by far the nicest place I’ve lived in Asia. They have hot water IN THE SINKS. They have WATER PRESSURE IN THE SHOWER. They have SOFT BEDS. They have AN OVEN. They have A MIXER. Perhaps best of all–they have NETFLIX.

I realize that people who have not lived in Asia or in developing countries will have big question marks over their heads, like–So, why is any of this a big deal? Sounds like a normal apartment to me!

None of the apartments I’ve had in my time in Asia have had hot water anywhere except the shower, and that was only sometimes. Thai beds are hard as freaking rocks (anybody know why?), and the rest I’ve already discussed. Anyway, it’s really nice to be here. Melanie and Eric are super laid-back and have made me feel completely at home. And, yes, they are going to have to drag me kicking and screaming out of here when the time comes. 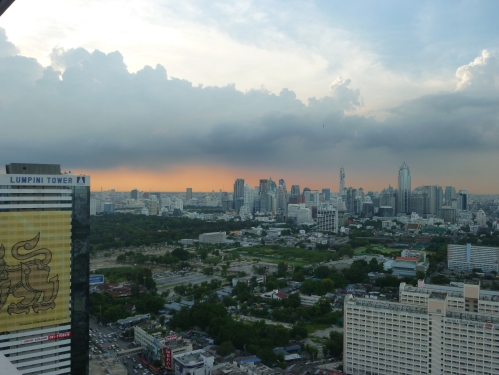 The view from Mel and Eric's. I can see my old apartment building way off in the distance...

As I’ve mentioned before, I have a vestigial baking limb that felt like it was being cut off due to the lack of an oven, so I’ve been using the oven here a lot. I’m not exaggerating when I say I feel like myself again when I mix some stuff together and then shove it in an oven to turn into food.

I decided to make chocolate cream cheese cupcakes the other day because they are one of my absolute favorites. I know I’m not a food blogger, but I’m going to post the recipe, anyway. BECAUSE I CAN.

I used a vegan chocolate cupcake recipe as the base because I find vegan cupcakes to be lighter and moister than traditional egg- and butter-based cakes. Seriously, give them a try. Nobody will ever know they’re vegan, I swear on my life. Vegan food gets a bum rap sometimes, but as long as you ignore the oft-annoying ramblings of vegan warriors, you can find a lot of good stuff.

This recipe is actually from the book Vegan Cupcakes Take Over the World, which is worth every single penny it costs. I’ve used my copy so much that it’s falling apart. And now you will make these cupcakes and then you will buy the book and everybody will be happy, yes?

Things You Do:
Now you’re going to make the cream cheese filling.
Stuff You Need for Cream Cheese Filling:
Things You Do:
To Assemble Everything: 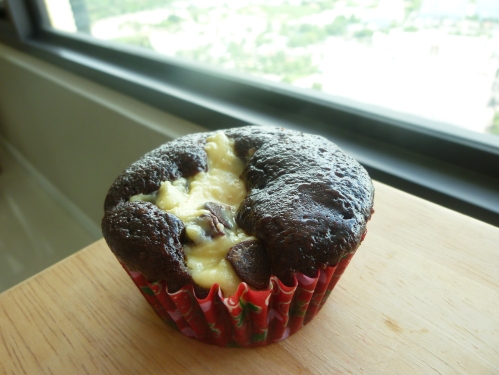 Clearly I will not be making the leap to full-time food photographer anytime soon.

Important Note:
The next morning, you are allowed to call these “chocolate cream cheese muffins“, then heat them up just a little bit in the microwave (or set them on the counter for 15 seconds if you live in Thailand) and eat them for breakfast with coffee, while pretending you’re at Starbucks. I just saved you, like, $15. YOU’RE WELCOME. I accept cash donations.
Final Score
Chocolate Cream Cheese Cupcakes: 0      Megan: 1
They’re SO good!